Rich pressed his forehead to the rain-streaked glass. His grubby clothes scratched against his skin as the monorail bucked over a siding. The people around him jolted in unison, hanging heavily on plastic handles or bouncing on the cheap, hard seats.

Rich hated to look inside on the monorail, to see face after face of blank Japanese preoccupation, eyes staring safely into the middle distance. He hated to watch as they all rocked in time with the monorail’s smooth shivers, their expressions never changing as they swung from their hangers.

Rich’s eyes squinted, trying to find an image through the blurred window.

He loved the lights of Tokyo, warped and twisted though they were by the mild raindrops marbling the glass. They always reminded him of his few experimentations with crappy street shit. Colours flashed by, winding and oscillating. Neon fish, deep as shadows chased each other with lightning speed across the cold glass. Tokyo at night was a hallucination. In the big squares, Las Vegas on acid, Lights all around you, grinning faces, golden M’s. Cars and ‘rails swish past, their lights sweep over you , light the back of you trench coat, light your jaw, your eyes buried in the shadow from your battered fedora. But the street was dark. Framed and hemmed by fairy lights and hallucinations, but always the faces around you were in shadow, always it was dark right in front of you , lights framing a patch of darkness over every face.

The ‘rail was now in a tunnel made from the sides of two skyscrapers which towered above. The windows of the building were a few inches from Rich’s face, pressed to his window. Office lights flashed past, identical cubicles through the glass, the light bulb always in the same place. The same light, flickering like stop-motion as window frames obscured it.

The closeness vanished and Rich was staring across a wide square. Far away through the mists, a vast face smiled and placed a pill daintily on her tongue. Rich watched dead-eyed, greasy hair flattened against his forehead by the glass.

A wink of a brand name, and the face returned, smiling warmly and popping the pill in her mouth and smiling again. Blade Runner. He shouldn’t be here. Rich knew this. He should be struggling fur clad up a log-bound northern ice floe, seeking dark pelts. He should be staring at impassive from the back a stained, impitent bus in burnt Iraq. he should be twisting in pure coral water, off a white beach. He should be called Alex, Laurie, The poet. The wanderer.

Dragon. Garland. Don Rich. The Slicer. the Spider. He was Richard, an ant in a labyrinth. one of the scaling, climbing insects beneath the pipes and sewers of Tokyo, just another Brit traveller swallowed by Tokyo neon life.

Two months ago, he should have been here. He should have been in the lights, discussing techniques with cyber-punks, dodging cops with blade graffiti gangs. Instead he had actually come here, and found that the majority of Tokyo was underground, and was swallowed and disappeared, just another minority of one.

Magnetic-powered Roller blades. Spiky hair held up with flying goggles. MegaTokyo. These things he had not seen. He sponged behind a sink in a deli by day, and by night, the blue tattoo on the retina that was darkness in this city, he slumped on the metro, staring at the lights and tasting the grit in the air around him.

Rich stepped out of the train. A light rain was falling, but this was Tokyo rain, which waxes and wanes as you walk, covers and canopies far above casting shadows of shelter invisible in the night. Rich walked. A raggedy guy peddling some cheap spliffs proffered a bag. Rich took one. You could find these rat-dealers everywhere you went in the city. The smokes were truly terrible, but Rich was past caring. The guy gave him a conspiratorial nudge that that required no translation, and extracted an even grubbier bag from his coat. Rich shook his head. The bag they kept inside their coats was the really dangerous stuff, cut with god knows what. Rich threw a couple of coins at him for the spliff, and meandered away, wreathed in pacifying smoke. The dealer followed him hopefully for a bit, but rich waved him away without force.

A shop front beckoned him. A garage, lights on, light spilling out, shouts and beeps from inside. Penny Arcade. Kids wailing at screens. Rich made his way to the bar, really just planks set up on tables. There were two young men, no more than nineteen, leaning against it and holding a heated debate, while the barman, not much older, listened in with the air of an umpire.

“No, no, you nark!” one was saying energetically. “Eight is far superior to nine simply because nine pushes the hardware to it’s limits. Listen…” The other one silenced him with a wave of his hand, and began to count out points on his fingers.

“One. (1).” he said. “Superior graphics. Simple as that. Two. (2). The advanced z-buffering makes the whole package run far smoother. Three. (3). The ATE’s add a whole new dimension to the game.”

“You have to consider the plot development…” whined the first one. He was a small, blond, pale Chinese, wearing an unreadable Anime T-shirt. His hair was spiked into a series of high, curved blades. Around his narrow waist was a plastic belt covered in pouches and wires.

“Oh? Oh? We’re on to plot now, are we?” said the second forcefully. “Well, let me tell you some thing about plot, Cloud.” He was wearing combat pants and a faded black X-box T-shirt, and a pair of white gloves, and his hair was swept forward into a sharp, drooping fringe, held up by a pair of snow-goggles that looked as if they had been moulded into the style.

“Actually, Jinn,” the barman put in. “Eight’s plot is far superior.” This sparked a fresh round of protests.

Rich walked slowly away, a small smile on his face. He sat down heavily at a table and cast an eye over the rest of the room, dragging on his spliff. A short teenage girl in a red dress, probably the barman’s daughter, leaned over the other edge of the bar, typing something into a laptop, chin on hand.

Sure, doll. I’ll find your husband’s killers, (drag) or die tryin’. Rich weaved away from the arcade, eyes flashing. He fell into an alley, to clear his head. The shadowy figures crowded round the far dead end wall spun in alarm as Rich clanged through a roadblock of American-style dustbins.

Dodging and weaving like monkeys, they shot towards him, past him, rushing guilty headlong into the street. None were older than fifteen. Rich stared at them in shock, frozen, only jolted as they pushed past him in the narrow alley somewhere beneath the towers of Tokyo. Rich stared straight ahead, at a comic strip of frightened faces streaming past him. Every one was wearing roller blades. He looked, transfixed, up at the dead end wall as the last of them skated away. The kids had nearly completed a massive Anime-style portrait when he had interrupted them. A tall, thin teenager wearing psychedelically coloured baggy pants and no shirt was skating easily away from chasing police, helicopters and men in black suits. His skates were huge and wired like a computer. He wielded a paint can in each hand. Rich spun in alarm as someone entered the alley behind him. The dealer stared past him at the graffiti, then looked questioningly at him. Rich looked down at his heavy coat, then into the dealer’s face.

The mirror-glass windows of the towers all around rang with a phosphoric foom as the searchlights ignited. A silent helicopter chopped steadily between the buildings, it’s smaller lamp a weaving blade of light in the fog. The alley was illuminated suddenly, blindingly. Wedge and Garcia’s heads whipped up from their work, the light shining off Wedge’s plump, balding head and the lenses of the complex goggles obscuring most of Garcia’s face. Elena spun, leather jacket whirling and revealing the countless holsters strapped to her body. Crane shot straight up into the air, landing crouched and ready on a fire escape two floors up, mouth already forming the words of a chant.

The searchlights lit up only the back of the tall figure standing in the middle of the alley, overseeing his men’s work. The unforgiving glare illuminated every dull stain, every crease of the man’s ancient brown trenchcoat. Dozens of police cars screamed to a halt blocking the wide street beyond the alley, sirens mewling pitilessly. Blue and red strobes stroked across the figures in the alley, sending gibbering shadows streaking across the dirty bricks either side. The figure turned his head unhurriedly to look backwards, still not turning round. The brim of a battered fedora dug a well of shadow across his face. Torchlight from the cops behind their cars glinted off one eye deep in the darkness, a tiny malevolent bead of light.

“Well, boys.” he said in a steady voice. “It looks like we’ve been set up.” The crowd of cops jostled as taller figures pushed through, their faces masked and their bodies coated in black combat suits.

Dragon’s men settled into fighting stances, eyes locked on the troopers. From a holster slung down his back he pulled a long shotgun, and his other hand slid a curved sword from a sheath in his coat. Beneath his hat, teeth glinted. Early morning mist swirled about his feet.

Rich shifted, smiling in his sleep. One hand clasped the paper bag to his chest. The sleeping tube was filled with sweet-smelling smoke. 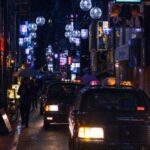