Mary was an attractive girl of nineteen years of age, although she was single and jobless she was never lonely or penniless. Always, Mary had the latest fashionable clothes, no matter what the price. A girl going places or so one was led to believe. You could always find Mary at the weekends down at the local pub, her glass rarely empty. Invariably she would be surrounded by plenty of potential Romeos. Shrewd Mary would always keep a few hanging on until the end of the night. These creditable ones would ensure Mary’s half filled glass never became half empty. Mary’s girlfriends happily carried away the rejected ones. And so the harmonious balance continued week after week after week, until eventually reality caught up with our Mary.

For through all that loveliness that Mary emitted there was a chink in her armor. The constantly abundant attention, Mary would have swapped it all in an instant. For down, deep down inside Mary’s soul there lurked a black spot. It was a pinprick in size, but with every passing day it ate away a little more of Mary. It rooted itself onto Mary’s thoughts, suckling away like a newborn on her dreams, hopes and anxieties. Boy, did it like anxious thoughts and unfortunately for Mary she had them in abundance.

You see Mary’s deep dark rooted secret was, quite simply, she hated herself. Not her looks or her personality or even her body geometry. No they were perfect-almost. It was her skin color or rather her colorless skin. For Mary was pale, not ill looking pale, more fairy tale princess looking pale: but she loathed her untainted complexion. She had tried many things: skin toners; skin dyes; creams, foreign holidays, all to no avail. Every attempt, every failed effort, every half-hearted idea only served to feed Mary’s black spot.

When Mary’s best friend, Marisa was getting married she asked Mary to be her Maid of Honor. At first Mary was ecstatic, when told the news, grabbing hold of Marisa, jumping up and down and screaming with delight at one and other. However, it was the Sunday morning after the night before as Mary sat bodily at the kitchen table flicking through the Sunday papers that the sudden realization of the forthcoming scenario dawned on her.

How could she have been so stupid as to accept Marisa’s invitation! Marisa and her family were half Italian, all dark skin and shiny teeth.

Why did I not see this coming? I’ll look so out of place, People will be laughing at me! They’ll be whispering behind my back, pointing at me! I’ll be a laughing stock. How could Marisa do this to me? WHY? WHY?

As her cancerous black spot grew in size, Mary’s confidence sapped from her. No longer did she carry herself proudly. Gone was her elegant composure, replaced with a disheveled and unbalanced looking Mary as the Wedding day drew closer. Even at the pub it was obvious Mary had lost her perch. The once rejected Romeos seemed to grow in stature, now turning their backs on her, some even ignoring her that she no longer cared to go near her local. It was her Mum who eventually noticed the rapid depression that had consumed her so.

Mary looked into her Mother’s face, searching for a hint of derision but found none. Then the dam burst and through fits of tears and howls of pain, Mary’s emotions, which for so long had been penned in, like caged animals were set loose. Her words were barely audible as they clambered over each other fighting to be heard first. The humiliation; the hurt; the pain and the lunacy of it all were raw and ill bred.

Mary’s display physically shook her Mum to the core of her ice-cold heart. Mum held on as her daughters anguished wracked body crumpled upon her, holding her tightly as she sang soothing words of comfort and eventually when it was all but finished she said in her best perfected motherly voice,” Dearie me, is that all?” scalded a smiling Mum,” I would have thought a bright young thing like you would have figured that one out long ago.” Mum stroked Mary’s long black hair and added, “Sun beds, that’s the answer. Sun beds.”

The Wedding was now less than three weeks away (it had been twice that long since Mary’s breakdown) and Mum now had complete control over Mary’s life.

Her first act of power had been to purchase Mary her very own high-powered sun bed. Then in blitzkrieg fashion she enlisted Mary as a member of ‘Terry’s Sun Parlor’ using up her maximum visits of six a week. Then Mum struck gold when an advertisement stating a vacancy for a level mature young person to hold reception on a part time basis at the local health club was observed. The manager of the establishment was a close friend of Mary’s Mum. A deal was struck over a few drinks and a late night cap that Mary would fill the position and receive instead of a cash payment for any hours worked a gold token for the club’s latest state of the art superpower sun bed.

On the eve of the Wedding saw the hitherto pale Mary emerge from her cocoon like existence and back into the glare of her peers. She entertained once more back down at her local pub. Like an eclipsed sun they gathered around her entranced by her dark beauty. The night was a massive success for Mary who stayed on long after Marisa and her friends had left. For so long she had forgotten what it was like to be complimented and sought after. Mary like any other self-respecting addict was hooked once again and loving her first fix in a long time.

Inside, Mary’s black spot began to shrivel and die.

When Mary drunkenly struggled up to the front door with two escorts in tow she was met by her Mum at the front step. After thanking the lads who had brought Mary home, she turned on Mary with a savage lamentation. The tongue-lashing lasted for nearly an hour. Cowering Mary listened with saintly presence as her Mum denounced the evils of mixing drink with boys. Eventually, when it was all over she made Mary promise that it would never happen again and then retired to her room to prepare for the big day ahead.

Mary crawled into her bedroom and lay on top of her bed staring at the ceiling with the sound of her Mum’s voice ringing in her ears. She noticed the sun bed canopy sitting in the corner of the room and rose from her bed and into the jaws of the canopy. Flicking the switch, each tube flashed and danced into life, each one happily radiating like little supernovas. Mary closed her eyes under the eerie blue light and dreamed of weddings and fairytale endings.

Its pulse was very weak indeed, but it had been given a chance, it had felt her Mum’s voice and latched onto it, holding it firm to itself, draining every inch of fear from it and into itself. It began to grow.

The morning of the Wedding saw Mum up at first light, preening herself as she made her way through the house. As she passed Mary’s room she stopped and sniffed air. It smelt like burning candle wax. She opened the door and stared into a world filled with electric blue light. The air singed her nostrils when she took a breath. Her hand flew to her mouth as she doubled over convulsing violently she fought to stop herself from blacking out. On her hands and knees she crawled out the room dizziness and nausea welling up inside. Reaching the phone she called the Police.

“I’ve never seen anything like it in my life,” said the young Constable,” What happened to her Doc?”

“Well when the lads got here first,” the Doctor removed his glasses and gestured towards the sun bed canopy that still held Mary’s covered body in its jaws, “The Mother had warned them about the smell, but they still weren’t prepared for what they were about to see. It seems that sometime early this morning the young girl had decided to go under the sun bed whilst under the influence of drink. She fell into a deep sleep, but the timer mechanism had been so tightly wound back that it failed to switch off. It just kept on running and running while she slept soundly.” The young Constable walked around the side of the bed, carelessly brushing against Mary’s exposed leg. Thousand of tiny snowflakes fell onto the bedroom carpet like a miniature snowstorm.

“But how would that do what it did to her Doc”

“Have you a microwave son?”

“Do you know how they work? How they cook things son?”

“They cook from the inside out. Well that’s what happened here.” Said Doc.

“What you mean a sun bed micro waved her insides! But that’s ridiculous; my girlfriend uses a sun bed. I mean there are tons of people who use them. Christ, I even use one now and again,” the Constable said,” I mean look at her, she’s all blisters and blown up like a burst balloon. Surely there is another reason, Doc?”

The Doctor shook his head and then led the young Constable back downstairs towards the grieving Mum.

The bloated black spot began to die. Without its life force to feed off, it could exist no more. But it knew it would be reborn elsewhere, there were a thousand more Marys out there all willing to pay the price for beauty. Anyway its job here was done, well done to say the least. And then it was gone. 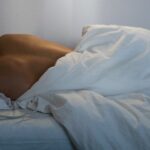