A crowd was gathered outside the city.

People milled about aimlessly, bumping into each other as often as they were bumped into. A feeling of quiet panic and frustration trickled through, subsiding once, swelling again. The only thing that kept an epidemic in check was the apathy that seemed to pervade beyond flesh and marrow, an attitude of atrophied zeal that was the core of the crowd.

Fillmore felt the apathy gnawing at him, trying to pull his listless body into the steadily growing mass of people. Into the crowd that was content to swell. He felt the frustration of the crowd, knew that it ran contrary to the oppressive pessimism. Fillmore, as he pushed his way through the directionless mob, gathered the thread, pulled it from where he could. Soon, he was next to the gates, the barrier that he presumed held the burgeoning crowd from spilling into the streets within.

He pounded his fist on the door, hoping to communicate the anger of the entire people gathered outside with one fist blow. The ponderous wooden gate swung slightly, creaking as it did. Fillmore pulled his hand back, and shaking it in pain, stared intently at the barrier that had given much more than the two inches of airspace Fillmore could see. It had given him hope. He promptly turned around, and tried to disperse his hope throughout the crowd by the simple means of a smile and quick gestures toward the door. Fillmore saw this new emotion hit the first row of despondent people like a gentle wave, he saw it spread and fray, saw hope being isolated in patches, before being engulfed again by the horrible despair. Fillmore began to sense that the bleakness that the crowd emanated was a powerful force.

“It won’t work,” whispered a man. He lay crumpled on the ground near Fillmore’s feet, he faced the door that had just been upset from its moorings.

“What won’t?” Fillmore quickly appraised the man, who he found to be of an overall haggard, inconspicuous appearance. Fillmore wanted to spit on him, on the man that at the same time he wanted to save.

“Hope. Saving them.” The man nodded his head back toward the mob that had surged, then relapsed. “They know the door is unlocked. They know there aren’t any guards to turn them away.”

“Then why not go in? Isn’t that what they want?”

“Yes, it’s what everybody wants.”

“The door’s open,” Fillmore was exasperated. “I opened it, they can go in.”

“I opened it once, too. They didn’t go in then either.”

Fillmore sent out tendrils into the crowd. He found that going onside the gate was a concern, but hardly a seriously considered one. “Isn’t this what they’ve been waiting for?”

“It’s exactly what they’ll say they want. If you ask them.” The man had shifted his weight, it appeared as though he had moved closer. Fillmore hoped he was reaching out, hoped that he wanted to go in the door.

“Come on, friend, let’s go in. Forget the other people.”

The expression on the man’s face told him that he had been wrong. The man was not a rogue visionary on the outskirts of society, but that he was a missionary, a pillar of the church. He was here to pull Fillmore into the sweet comfort of confirmation.

“Why? What’s inside that door? Is it better than what we’ve got right here?” The priest’s gospel rolled of his practiced tongue. “We’ve got enough right here. Security, stability, comfort.”

Fillmore wanted to scream in anger at the depression the man pressed on him. He remained calm, and his voice only betrayed his fierce bemusement at the cynicism of a people so unused to curiosity. “Why not just see what’s inside the door? If it’s so terrible, you can come back out.”

“If you want to go in, you can. We’re not going to stop you.” At this, the man looked back to the crowd. He seemed to be weakening the longer he stayed away from it.

“Maybe I will…” Fillmore looked up at the panorama of people spread out before him. He saw unity, a single mind. But, more importantly, he made a reassessment. What he had previously labeled depression was a lack of upheaval. Neither good nor bad. He felt the comfort, realized that it felt good to be accepted by a group, any group. He looked for the man, but didn’t see him. Lifting up his eyes, they fell on a rather pretty girl at the edges of the crowd. He assumed she was about his age. He knew nothing about her, yet he felt that he could learn to love her. For no other reason than that everyone in the crowd loved somebody. It would feel good to be a part of something, Fillmore thought. “Maybe I’ll go tomorrow,” he said to the wind. He left the door behind him, making a mental note to go tomorrow. Tonight he was going to go through the motions, to be liked by everybody simply because he was like everybody. 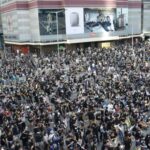